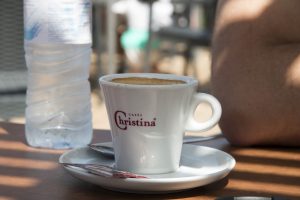 Much like Italians, the Portuguese can’t go on with their espresso-type coffee. So true is this that in Northern Portugal, around Porto (the country’s second city), the most used word for coffee is “cimbalino”, taken from Cimbali, the century-old Italian brand of professional espresso and cappuccino equipment. Foreign tourist, according to BBC, has been soaring in the country and no tourist leaves without trying it.

The café is the most basic and standard commercial shop, even more than groceries and mini-markets. If the tiniest village does not have a café, it does not have any other commerce. However, the oldest and most famed cafés are, of course, in the biggest cities.

In the central Santa Catarina street, you can find a marvellous Art Nouveau establishment working uninterruptedly since 1921.

One of the oldest cafés in Europe, since 1782. Fierce debates about the French Revolution were made at its tables.

A Brasileira do Chiado, Lisbon

Founded in 1905, “The Brazilian Lady” was an initiative of a former Portuguese expat in Brazil. The establishment was known as a meeting point of intellectuals and artists; the esplanade showcases currently a statue of the Portuguese poet Fernando Pessoa, who was an “habitué” of the place.